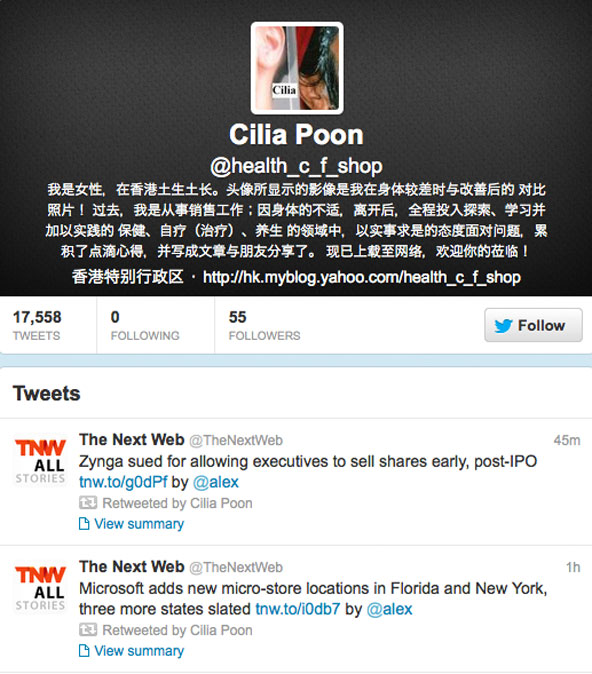 The Twitter account for someone who claims to be Cilia Poon appears only to retweet items posted by The Next Web, a technology blog.

Far from slowing, the market for fake Twitter followers seems to be taking off.

The fake Twitter follower phenomenon made headlines last summer after Mitt Romney’s Twitter following jumped by 100,000 in a matter of days. That news inspired a number of social media management companies like StatusPeople and SocialBakers to develop Web tools that try to determine what percent of a person’s Twitter followings are fake.

But those sites have hardly deterred people from dealing in the market for fake followers and fake retweets. The market is also becoming more sophisticated. In many cases, high-quality false  Twitter accounts are nearly impossible to discern from the real thing. Those that sell them claim that they can make up to a million dollars in one week.

There are now more than two dozen services that sell fake Twitter accounts, but Mr. Stroppa and Mr. De Micheli said they limited themselves to the most popular networks, forums and Web sites, which include Fiverr, SeoClerks, InterTwitter, FanMeNow, LikedSocial, SocialPresence and Viral Media Boost. Based on the number of accounts for sale through those services — and eliminating overlapping accounts — they estimate that there are now as many as 20 million fake follower accounts.

Fake followers are typically sold in batches of one thousand to one million accounts. The average price for 1,000 fake followers is $18, according to one study by Barracuda Labs. Mr. Stroppa and Mr. De Micheli said some sellers bragged that they made $2 and $30 per fake account. A conservative estimate, they said, was that fake Twitter followers offered potential for a $40 million to $360 million business.

Mr. Stroppa and Mr. De Micheli explored the underground economy for fake followers. The market functions somewhat like eBay in that sellers receive customer feedback. The researchers said they approached sellers with positive feedback and found that fake followers were typically sold in packages ranging from $1 to $1,000 for 1,000 to one million accounts. For instance, Fiverr sells 1,000 Twitter followers for $5.

Those fake accounts can be sold to multiple buyers — in fact, buyers prefer that the accounts follow others to make them appear more authentic. Web tools that try to tell fake followers from real ones often look at an account’s inactivity or its following-to-follower ratio. The more people they follow and the more active they are, the more authentic they appear.

“There is now software to create fake accounts,” Mr. De Micheli said in an interview. “It fills in every detail. Some fake accounts look even better than real accounts do.”

The most coveted fake accounts tweet (or retweet) constantly, have profile pictures and complete bios, and some even link to Web sites that they claim belong to them. But in many cases, a close look reveals that some of the accounts were set up purely to retweet material from specific sites.

“Resellers lately haven’t been selling only accounts and followers, but are now getting into the retweet business,” Mr. Stroppa and Mr. De Micheli wrote in a report. They said prices range between five retweets a day for $9 per month to $150 a month for 125 daily retweets.

The Twitter account for someone who claims to be Cilia Poon, for example, includes a bio, in Chinese, a link to a Yahoo health blog with Chinese content and has tweeted over 17,000 times — but each tweet was simply a retweet of a tweet posted by The Next Web, a technology blog (in English), that wrote about the fake Twitter follower phenomenon last December. Each time The Next Web Tweets its content, the Twitter user Cilia Poon retweets its content right away. Digging further they found several more examples of accounts that appear to exist solely to retweet content for The Next Web. (Some more convincing than others.)

Zee Kane, the chief executive of The Next Web, said the company was aware of the accounts but had never paid for fake followers or retweets. He said a likely explanation was that the company had created a tool, called spread.us, that allows people to automatically tweet its content.  He said the company stopped marketing that tool eight months ago because it did not add quality traffic to the site.

Mr. Stroppa and Mr. De Micheli noted that while Facebook requires that users use a real e-mail address, Twitter does no such thing. To prevent fake accounts, or what are called “bots,” Twitter asks people trying to create multiple accounts from the same I.P. address to answer a “captcha.” Captchas — those puzzles used by e-commerce sites that require people to type in a set of distorted letters and numbers — are relatively easy for humans to read and retype but difficult for machines to decipher. But the researchers point out that new software can beat captchas, or people can be paid to type them in, in real time, for as little as a penny per captcha, or even less.

The two spoke with one reseller who had written software that could create up to 100,000 new accounts in five days.

“Business is great,” he told them, adding that he had hired a couple of freelance programmers, and that “a kid could bypass Twitter’s defenses.”

Jim Prosser, a spokesman for Twitter, said the comparison between Facebook’s and Twitter’s authentication processes was an ill fit.

Mr. Prosser said Twitter had taken an active role in fighting the biggest sources of malicious and fake content. Last year, the company sued those responsible for five of the most-used spamming tools on the site.

But he also noted the difficulty of telling a fake account from the real thing. “Forty percent of our user base only consumes content,” he said. “What looks like a fake account to one individual could actually be someone who is on Twitter purely to follow people — like my mom, who follows me and my brother, doesn’t have a profile bio and has never actually Tweeted herself.”

Loading...
Visit the Technology section for complete coverage of the industry. »