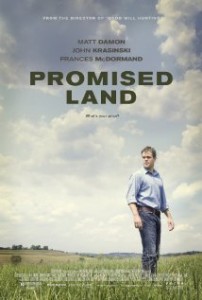 I went to watch Promised Land (2013) last night.  The movie is rich with energy content, and so I will be blogging about it over multiple entries in the coming days/weeks.  But, I wanted to get a brief review and comment out quickly while the movie is fresh on my mind.

First, as a movie, it was really quite good. Well written and well-acted. Plus, there is a persistent subtext of moralistic dilemmas and non-obvious tradeoffs that pull at the viewer’s emotions, all overlaid with a love story.   Matt Damon and Frances McDormand were outstanding together as landmen securing land leases for a drilling company.  Better than Starsky & Hutch, Laverne & Shirley, Cagney & Lacey (Okay, I’m dating myself) or any other pair that jumps to mind.

Third, the movie got two things wrong. Like most coverage of shale gas production, the environmental risks as portrayed in the movie were overblown.  To be clear, I think that shale production has real risks that must be managed and regulated or else we’ll all be sorry. But at the same time, the portrayals of the risks were too breathless for my taste.  The other thing that caused my eyebrows to go up was the laughable portrayal of the energy industry’s clumsy, overt, and eager attempts at bribing politicians and environmentalists.  The movie implied that the industry’s bribery attempts are so common they have an equation they use to calculate the cost-benefit ratio for bribing politicians and even have an authorized budget for it that they are ready to dispense at a moment’s notice and without much prompting.  Give me a break.   While there is no question that corruption happens in the energy industry (like all industries), this caricature was over the top.

Beyond those three main points, there were many elements in the film that caught my eye.  There is a plot twist at the end, but I will avoid providing a spoiler.

The local hero who is a conscientious objector for shale production is a high school science teacher played by Hal Holbrook.  Two things about him were intriguing to me. First, the character’s name is Yates.  The Yates oil field in West Texas is legendary: it has been in production since the 1920s, has yielded over 1 billion barrels of oil, is one of the largest oilfields in US history, and is the site for many advanced production techniques that are reminiscent of hydraulic fracturing (such as water flooding and chemical injection).  Second, the character earned a PhD from Cornell.  Those who follow the energy industry will recognize Cornell as the home institution for a professor who published papers that were very critical of shale production. (As a side note, those studies have been widely panned.)

Go see the movie and let us know what you think.