What science can tell us about the personal and social value of prayer
Posted Jun 23, 2014

According to a 2013 Pew Research Poll, over half of Americans pray every day. A 2012 poll found that over 75 percent of Americans believe that prayer is an important part of daily life. Other polls indicate that even some atheists and religiously unaffiliated individuals admit that they sometimes pray.

Our species has probably been praying for as long as we have been able to contemplate our existence. And though we may never be able to establish evidence that a deity or spiritual force actually hears our prayers, in recent years, scientists have begun to consider the potential tangible (i.e., measurable) effects of prayer. And this research suggests that prayer may be very beneficial.

So here are five scientifically-supported benefits of prayer:

Studies have demonstrated that self-control is like a muscle. That is, it gets fatigued. You can only do so many push-ups before your muscles give out. Similarly, activities that require self-control are fatiguing, making it more difficult to make good choices the more you have to use your "self-control muscle." Think about it. You are more likely to lose your cool or engage in mindless eating when you are mentally exhausted.

Recent research indicates that prayer can help you get more out of your "self-control muscle." Research participants who said a prayer prior to a mentally exhausting task were better able to exercise self-control following that task. In addition, other studies demonstrate the prayer reduces alcohol consumption, which may reflect the exercise of self-control. Findings such as these suggest that prayer has an energizing effect.

Researchers found that having people pray for those in need reduced the amount of aggression they expressed following an anger-inducing experience. In other words, prayer helps you not lose your cool.

Researchers found that having people pray for a romantic partner or friend made them more willing to forgive those individuals.

Recent studies found that having people pray together with a close friend increased feelings of unity and trust. This finding is interesting because it suggests that praying with others can be an experience that brings people closer together. Social prayer may thus help build close relationships.

Researchers found that people who prayed for others were less vulnerable to the negative physical health effects associated with financial stress. Also, it was the focus on others that seemed to be contributing to the stress-buffering effects of prayer. Praying for material gain did not counter the effects of stress. So thinking about the welfare of others may be a crucial component of receiving personal benefits from prayer.

Scientists and public intellectuals who are critical of religion, focus on what they believe to be the irrationality of religious belief. Why waste time believing in things that have no supporting scientific evidence? These critics typically fail to consider the fact that scientific studies are finding measureable benefits of religious faith. As I have discussed here and here, religion is complicated. It can be both good and bad for your health depending on a number of variables. However, there is a growing body of evidence indicating that prayer, a behavior often associated with religion, can be beneficial for individuals and society.

The science of the human quest for meaning, significance, and self-transcendence.

Clay Routledge is an associate professor of Psychology at North Dakota State University.

Most Recent Posts from More Than Mortal

Is Nostalgia a Fountain of Youth?

5 Reasons Star Wars is the Perfect Franchise for Nostalgia

Will the new Star Wars movie make us feel nostalgic?

Why do People Believe in Supernatural Evil Forces?

Supernatural evil forces contribute to the feeling that life is meaningful

FEATURED IN THE COLLECTION

The Science of Prayer 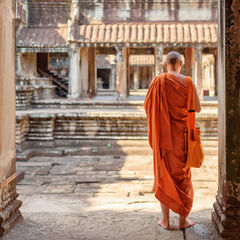 Prayer is more about reaching out to the transcendent than anything else. Cover Image: Efired/Shutterstock
All Stories